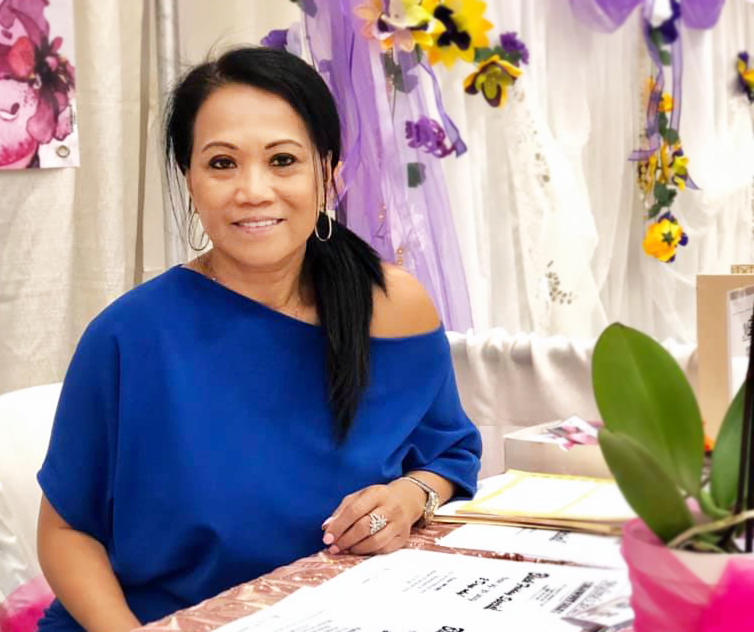 Myline Villanueva Kamsch was born in the rural area of San Andreas, Philippines. She came from a big family of five sisters and two brothers. It was difficult growing up there since there were few opportunities and few modem ameni­ties such as running water and electricity. There were no public schools available in the Province during this time, so Myline’s parents worked very hard to send their children to private schools. They did not have much money to buy their school uniforms or new clothes every year and at the age, Myline found herself taking apart her uniforms, turn­ing the fabric inside out, and resewing it into a new uniform. This was the beginning of her love of fashion and design.

Her college years took her to study education and law but she realized these subjects weren’t for her and decided to follow her passion for clothing design. She moved to Manila to attend a design school where she learned the art of tailoring, dressmaking, and pattern making. She began work at popular boutiques in Manila that manufactured bridal and evening gowns. She quickly received several promotions that put her in a supervisor position within the bridal department.

In 1988, Myline moved to the United States to work with Margaret Christie, where she was in charge of bridal design. Six years later, she was able to follow her dream and opened Myline’s Fashion which specializes in custom-made bridal attire, evening gowns, and prom dresses. Myline added tuxedo rentals to her portfolio when she acquired Josettes Bridal in January 2009.

Myline has designed for many North Carolina celebrity figures, including Miss Greensboro, Miss Teen North Carolina, and Miss North Carolina who wore Myline’s original design in the Miss USA pageant. Her editorial clients include Vanity Fair Corporation where she is frequently onsite to oversee clothing styling for the models.

Myline is also heavily involved with several charity organizations and her most current pro bono work is with Pure Fashion, an organization that teaches young people to have a good self-image and to be good role models in virtue and in the fashions that they wear.

Currently, she is also developing educational and business opportunities for Filipinos in the Province where she was raised and where her siblings still live today.

Schedule an Appointment with Myline